Ok, I read a few books last year.  I’d like to share three.  They weren’t published last year, but that’s when I read (or re-read) them.  You would be doing yourself a favor to get your hands on any of them. 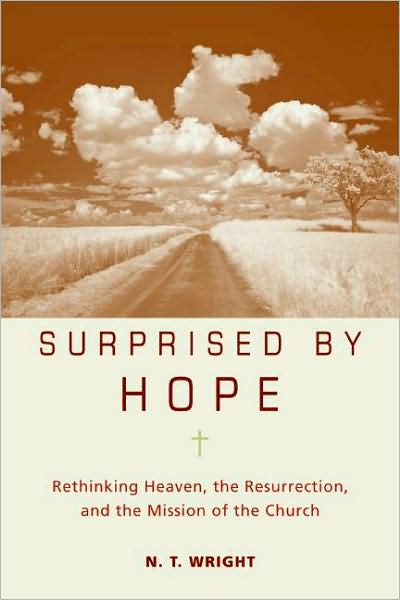 This is one is sort of a no-brainer.  If you only read one book this year, it should probably be this one.  In many respects, this is Wright at his finest.  He is a book writing machine.  Some of them very academic.  Others far less so.  I’d say this is written for something of a broader audience, but it ain’t no Joel Osteen, if you get my drift.  Here, he presents as robust a vision of resurrection life.  And who doesn’t need that?  Thought so.

I had the pleasure of re-reading this book this year and was reminded how good it is.  It is not difficult to read, and it helps people get a grasp on understanding how to interpret Scripture.  It is the difference between giving a man a fish, and teaching him how to fish.  The latter being obviously infinitely more valuable.  One person who read this with me said that she thought every Christian should read it…  and I couldn’t disagree.

This one may come as something of a surprise, but man, that J. K. can weave a tale.  Sometime in 2009, shortly after number six came out in the theaters, I got started on the series.    They are all enjoyable, but this one seems to be the best of the ones I’ve read so far.

I know that there are those who have sizable misgivings about the Potter series.  I share some concerns, but it isn’t the outright witchcraft that bothers me.  Things like mistrust for the “Ministry” and episodes of cutting loom larger in my mind.  And yet, occasionally you can come across some stuff that is about as solid as it comes…

“I do not think [Voldemort] understands why, Harry, but then, he was in such a hurry to mutilate his own soul, he never paused to understand the incomparable power of a soul that is untarnished and whole.”

Albus Dumbledore from Harry Potter and the Half-Blood Prince

I can scarcely think of a more fitting description of the damage we do to ourselves when we choose to live life other than the way it was intended to be lived.

Naturally, in order to appreciate number five, you’ll need to get after the four that lead up to it.  The one thing that is both genius and diabolical (but in a good way) is that you can’t really be in for just one.  As soon as you read the first twenty pages of Sorcerer’s Stone, you are in for the loooonng haul.

Alright, times a wasting.  Get on it.