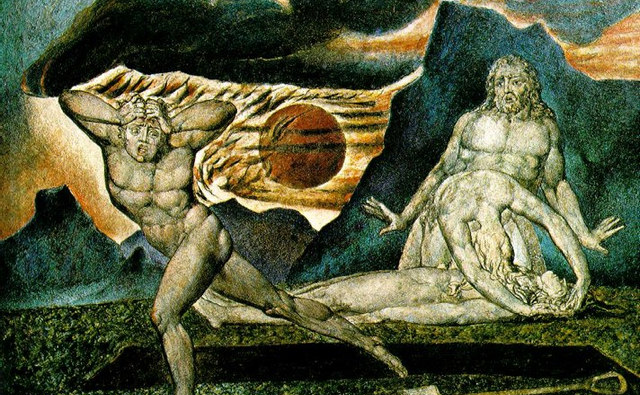 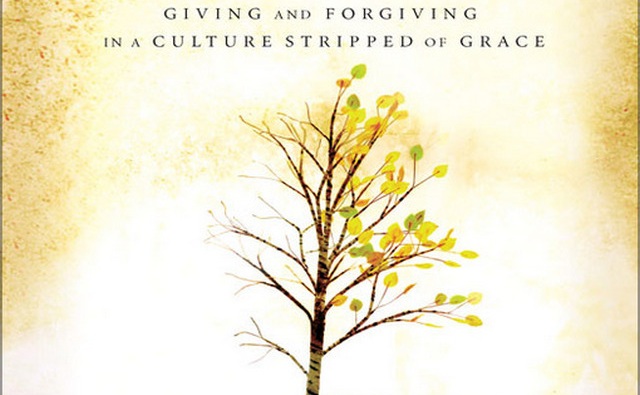 I got Volf’s Exclusion and Embrace and his Free of Charge: Giving and Forgiving in a Culture Stripped of Grace at the same time. I chose to read Exclusion and Embrace first because it is older and from what I could tell it was his more pioneering work. However, if the decision was made based upon which book had the better cover, there would have been no contest.

Free of Charge not only has the distinction of being the more attractive of the two books, it is also shorter and easier reading in general. So if you are in any way tempted to dive into some Volf, this may be the place to start.

Here’s a little something to whet your appetite…

There is God. And there are images of God. And some people don’t see any difference between the two.

… They simply assume that who they believe God to be and who God truly is are one and the same. God is as large (or as small) as they make the Infinite One to be, and none of the beliefs they entertain about God could possibly be wrong.

But in fact, our images of God are rather different from God’s reality. We are finite beings, and God is infinitely greater than any thoughts we can contain about divine reality in our wondrous but tiny minds … When we forget that we unwittingly reduce God’s ways to our ways and God’s thoughts to our thoughts. Our hearts become factories of idols in which we fashion and refashion God to fit our needs and desires … Slowly and imperceptibly, the one true God begins acquiring the features of the gods of this world. For instance, our God simply gratifies our desires rather than reshaping them in accordance with the beauty of God’s own character. Our God then kills enemies rather than dying on their behalf as God did in Jesus Christ. 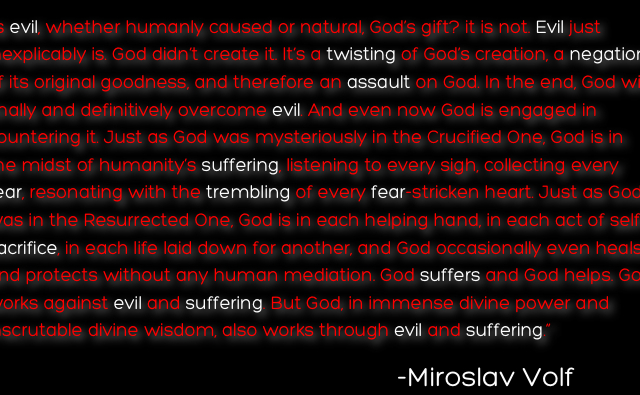 Yesterday, I gave fair warning of a steady stream of Volf-isms coming your way, and I intend to deliver on that promise. I would put up a picture of the book, but the design is so awful that you are likely to dismiss it on sight. The quote comes from Exclusion and Embrace and as you might guess, it is about rage and forgiveness.

For the followers of the crucified Messiah, the main message of the imprecatory Psalms is this: rage belongs before God  … by placing unattended rage before God we place both our unjust enemy and our own vengeful self face to face with a God who loves and does justice … Forgiveness flounders because I exclude the enemy from the community of humans even as I exclude myself from the community of sinners. But no one can be in the presence of the God of the crucified Messiah for long without overcoming this double exclusion – without transposing the enemy from the sphere of monstrous inhumanity into the sphere of shared humanity and herself from the sphere of proud innocence into the sphere of common sinfulness.

One of the things that I’ve really appreciated about this book is its universal relevance. Whether we are talking about nations warring over centuries old ethnic and religious animosity or the fight that a husband and wife had last week, his observations hold equally true. And come on, what’s not to love about a sentence like, “Forgiveness flounders because I exclude the enemy from the community of humans even as I exclude myself from the community of sinners.”

I recently picked up Miraslov Volf’s Exclusion and Embrace: A Theological Exploration of Identity, Otherness, and Reconciliation. My experience of reading Volf is like taking a freezing cold shower; you don’t necessarily enjoy it, but you walk away invigorated, alert, and refreshed. And then maybe later, you admit to secretly having liked it.

Volf, a theology professor at Yale, is a native Croatian who writes truly Christian theology that addresses the complexity of contemporary political and cultural realities. What all of this mean for you, dear reader, is that you can expect to be bombarded by Volf quotes for the next few weeks.

Starting with this one. Volf never explicitly references “the Man,” but I think we all know who he is talking about.

How does the system work? Consider first what might be called the “background cacophony of evil.” It permeates institutions, communities, nations, whole epochs, and it is sustained, as Marjorie Suchocki puts it, by “a multiply nuanced and mirrored and repeated intentionality of purpose that exercises its corporate influence” (Suchocki 1995, 122). This is the low-intensity evil of the way “things work” or the way “things simply are,” the exclusionary vapors of institutional or communal cultures under which many suffer but for which no one is responsible and about which all complain but no one can target.

Happy Monday! And don’t let “the Man” get you down.