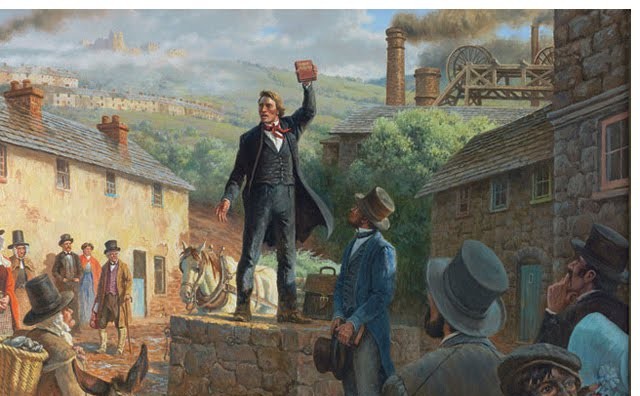 Crazy, I know. Two posts in one week. It is a regular blog revival around here.

Speaking of revivals, I’ve been thinking lots about preaching lately. I really should be spending all my thoughts on the Bible, since I’m suppose to write around one billion words on how we are to think about the sacred book. I take a small bit of consolation in knowing that Barth held Jesus, Scripture, and Preaching closely together, because he had the audacity and wisdom to see all three as part of the same movement in God’s self-presentation. Now if I would only think more about Jesus, I could finally become a card carrying Barthian. I might even get to join their special club. Should I be concerned that Barthian and Martian are only separated by two letters?

Anyway, preaching. For whatever reason, over the past twenty plus years, this rather introverted self has consistently had to stand in front of groups of people, open a book, and say things about that Reality which no person is ever truly qualified to speak. I’ve always considered myself to be a just above average preacher, and yet I keep ending up in situations where I am expected to do just that… preach. The church truly is a curious place.

In reflecting back on my own preaching, I’m struck by the variety of contexts I’ve found myself carrying out this charge. Chicago, Seattle, North Little Rock. Para-church, Baptist, Inter-denominational. White, Asian, Black. Varying ages, socio-economic backgrounds. And now, I unexpectedly (but somewhat regularly) have the privilege of preaching in a Presbyterian church in Scotland. A church which is comprised of Scots, English, Irish, Americans, Chinese, Japanese, Nigerian, and I’m sure I’m missing a nationality to two. Like I said, the church really is a peculiar place. Seeing as this calling (and I suppose I am beginning to see it more and more as a ‘calling’) looks like it is going to follow me me around a while, I want to think out loud – with you, of course – about this unusual activity.

My children are Whovians (look it up, it’s a thing). And in this tv show that they adore, people can travel in time. If I could jump in my own Tardis, then I would go back about fifteen years or so ago and share some words of encouragement with younger preacher me. When I tracked me down, I suppose that the first thing I would have told myself is that I really only have one gift as it relates to preaching.

You see, I’m not funny. I’m not really all that engaging. I often have no idea how to apply the Bible to ‘real’ life. The one thing I can do is take a person to the text. I read it closely and I observe things about the Scriptures that others fail to. In that sense, I’m like a tour guide walking people around a museum. I know people who get bored in museums because they don’t really understand what they are looking at, and so I take a great amount of delight in noticing things and showing people what I see. So that’s what I do. I help people notice things. That’s it.

But that’s not preaching. The museum-Bible analogy is problematic on all kinds of levels. Primarily on account of the de facto ‘deadness’ or ‘oldness’ of the things found in those buildings. Treating the Bible like a museum of interesting things to notice is hardly life-giving. Simply explaining a biblical text is one thing. Preaching is something altogether different.

And so there are others who are of the opinion that preachers need to give it life. Primarily by reading the Scriptures through their own experience. I believe the line of reasoning is something like, “if it hasn’t taken root in your own life, then how can you expect it for others.” I get that. The problem though is we become captive to one preacher’s experience with the Word and it becomes normative for ours as well. Then one has to ask, am I really encountering the Word or am I just trying to be like this preacher that I really admire? Plus it puts an awful lot of pressure on the preacher to be a model human. And more than that, it makes our experience with the Word a mediated one at best, if not an outright fabricated one. Do you see the dilemma here?

The idea that the preacher somehow needs to give life the Scriptures is problematic because Christians have generally believed that the Word is ‘living and active’ in some sense. The notion that preachers need to do something for the Word that it can’t do for itself is troubling. Which is at least one reason why Barth would make a distinction between Word and Scripture (another thesis for another time).

And yet, I think that preaching is both necessary and helpful. Mostly. Otherwise, we would just read the passage and let that be that. To be sure, simply reading the text could be an improvement on a number of sermons. But reading the text and preaching really are different things. Preaching takes seriously words written in the past in order to connect them to the life one leads today. The problem remains though. How is the preacher meant to bridge that gap? Do they exegete the text? Tell some memorable stories? Give folks three sure-proof ways of ‘applying’ the truth?

Or is it to walk through the museum and help them to see how this story really is their story? That failure to pay careful attention to this story has dire consequences, but choosing to embrace the main character of this story (or more accurately, recognizing that one has been embraced) really matters. Maybe more than anything else matters.

Actually, I think things are beginning to take some shape for me, and maybe not surprisingly it is good old Barth who will provide the theological resources for the way out. We haven’t gotten very far on what I would have told young preacher me, but I’m about done for today. I’ve got to get ready for tomorrow’s tour.