The Weepies – The World Spins Madly On 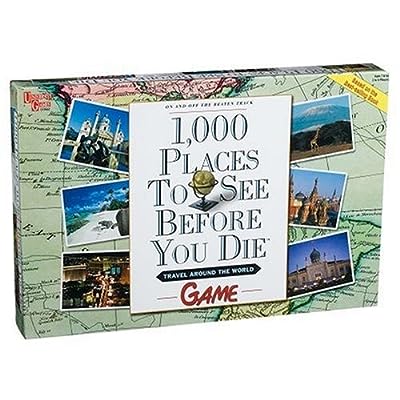 Yesterday, I gave away a game called “1000 Places to See Before You Die” at one of those Christmas parties where you unload stuff that you don’t want anymore but someone else might.  It occurred to me that giving it up was more than just getting rid of some stuff cluttering our home.  For some time now, I’ve been giving up the idea as well.

The concept is simple enough.  Just as the title suggests, they (whoever “they” is) have compiled a collection of the top 1000 places one would want to visit in the world before they die.  I do understand the appeal.  We live in an amazing world.  I’ve had the good fortune to travel to a number of pretty incredible places both in North America and abroad.  I say good fortune, but let’s admit it, my opportunities to travel far and wide are as much economic as luck.  Only the very wealthy (when compared to the rest of the world population) have the necessary funds to make trips around the globe.

Wealthy or not, I’ve enjoyed the places that I’ve been to.  And yet, even without checking the list of 1000, I’m pretty sure that I’d only be able to cross of maybe somewhere between one or two percent.  I realize that this is probably one or two percent more than most, but the point is that there is a bunch of the world that I haven’t seen.

And recently, I’ve come to accept that.  I know that for some seeing the world is something of an obsession.  They have a compulsive need to check-off all the places they’ve been.  Who knows what motivates this desire?  Perhaps it simply is a love of seeing new places.  Or maybe bragging rights in front of certain friends.  Regardless of what it is that drives a person to “see the world,” I think that get it done before I die is sub-biblical.

That line of thinking makes the assumption that if I don’t do it before I die, I won’t ever.  Even people who believe in an afterlife think that whatever their life after death is going to look like, it isn’t going to be spent on earth.  I’ve recently been helped to understand that there is going to be greater continuity between the new heavens/new earth and their predecessors.  That thought has been helpful for me in realizing that I don’t need to see it all now.  I really do have eternity to not just go some place and check it off a list, but if necessary or desired I can stay for a couple years or a couple millennium.

To be sure, it will be a world transformed, but I’m growing more convinced that it will still be this world.  As N.T. Wright contests, God made a world that he was pleased with, so it seems unlikely that he is going to scrap it to start all over.  Of course, no one is exactly sure how the world will be changed.  But I suspect the difference will be like going from black and white television to color (only more so).  Or going from 2-D to 3-D (only more so).

I like to think it will all still be recognizable.  But that it will be so new, that even if we had been there before – take the Canadian Rockies for example – then we’ll want to go again.  Back to the television analogy.  If we had seen the Wizard of Oz in black and white, when it came out in Technicolor, we wouldn’t skip going to the theater to see it again because we had already seen it colorless.  The addition of color was enough to make it a “new” experience, even if in many ways already familiar.

And this also means (finally getting back around to the point of the post), that if I missed it on the first go around, I won’t be lamenting not having seen the “b&w” earth.  The “new earth” will suffice and more.