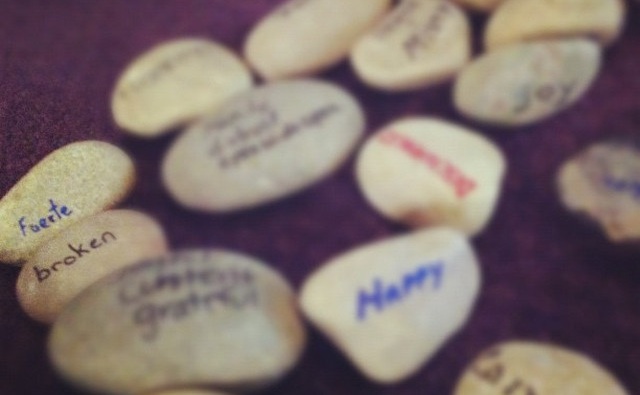 At church this past Sunday, I was on deck for the message. To say it had been a while since I’ve been up in the main service is a bit of an understatement. For various scheduling reasons, this was my one and only message all summer long. Our church has spent the summer reading and preaching through the Psalms and we’re pretty close to finishing up.

So which psalm does one choose when you have only one shot at it all summer? No brainer. Psalm 137. I’m not posting here to recap the message, if you are interested you can go listen HERE. My contribution to the service was average at best. And yet, many people appreciated the message and seemed to be impacted by it.

And here’s the reason why…

Yup, rocks. Because when you preach a message about smashing infants on rocks, it makes perfect sense to have some rocks in the pews as a visual aid.

No smashing happened with these rocks. The reason I’m taking the time to post at all is to recognize that some of the best ideas for a message/worship service are not my own. For those of you who know me, this comes as no surprise. You’ve been unimpressed for a while.

The rock idea came about the way so many good preaching ideas come to be – through the input of others. Two weeks prior to the message, I met with a small group of people responsible for putting the worship service together. You are probably thinking… “You guys plan for what happens in Sunday?” Shocking, I know.

During that meeting, I shared the direction the message was taking. Something about how the psalms teach us that we can be honest with God. One of my team mates, Donna, suggests that it would be nice to have some way for people to respond. That maybe we could encourage them to have some sort of written response of their own. I agreed that it would be nice to have a way for people to tangibly respond, but I had a small concern that there are folks for whom having to produce something with paper and pen can be a little intimidating. We all agreed that some sort of response would be appropriate, and hopefully I didn’t kill the creativity with my reservation.

I don’t think I did, because one week later we come back to discussing the upcoming Sunday. We were still mulling over what might be a helpful response. Then Sarabeth, another person on the team, says that one time she was encouraged to write what I’m guessing was some not so good stuff down on rocks and then take them to a lake and throw them as far as she could.

At this point, I’m wondering how liable we would be if one of our congregants had their head split open by rocks we encouraged everyone in the service to throw. I guess that just goes to show how my stunted creativity truly is. It took me a while to figure out that there are other options besides throwing the rocks. Donna says that she really likes the rock idea and so we take the time to figure out how to make it work.

And come Sunday, it ends up being an incredible way for people to connect with what is really going on inside of them. People wrote all sorts of things down on their rocks. Honest things. Towards the end of the service, many of them chose to come forward and symbolically place these things before a God who is never surprised by who we really are.

And all of this came about because I have the privilege working with wonderful people who have good ideas and keep pressing on them until they become great ones.

2 Replies to “a sermon in the making”