I know most of you are losing sleep wondering what is going to be on the infamous end-o-year mix tape.  So to pass the time, I’m going to share something approximating a “Top 5 Reads in 2010.”  However, as I’m prone to do, I’m going to spread this out over a few days.  Enjoy!

Best of the Best: 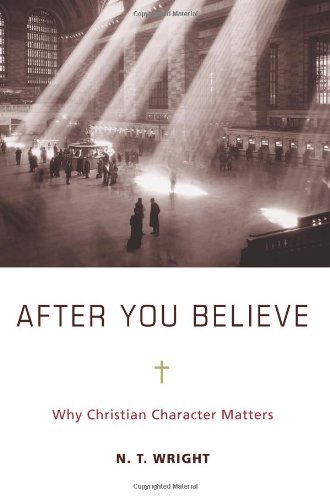 I’m sure it comes as no surprise that my favorite book of the year comes from my boy N.T.  In After You Believe, he talks biblically and sensibly (yes, you can do both) about what Christian character looks like and how it is formed in a person.  In his own words, this book is an attempt to answer the question, “What are we here for in the first place?”

The fundamental answer we shall explore in this book is that what we’re “here for” is to become genuine human beings, reflecting the God in whose image we’re made, and doing so in worship on the one hand and in mission, in its full and large sense, on the other.

As I’ve said before, Wright is one of the most influential biblical scholars around today.  Much of what filters down in various other writers and movements bears the stamp of his thinking, teaching, and writing.  You would be well served to spend some of your precious reading money and time becoming familiar with what he is saying.  I’ve read several books this year attempting to answer the “what are we here for” question, and they end up looking provincial in comparison.

One of the things that is particularly refreshing about Wright is that he doesn’t seem to get bogged down in culture wars.  I get the sense that this frustrates his would be critics who would just like to figure out if he is with or against them.  Conservatives tend to think he is too liberal, and liberals harbor suspicions that he is a closet-conservative.  Wright would rightly (no one ever tires of the play on words begging to be had with his name) affirm that both of these labels have outlived their usefulness and would be reluctant to use either to describe himself.

While After You Believe is as fine a place as any to start, I often point people towards The Challenge of Jesus as an intro to Wright.  It is profound, relatively short, and highly readable.  Starting with this book has the added benefit of beginning where I think all theological reflection should start…  Jesus as revealed in the Scriptures.

Up next…  theology meets the UFC.