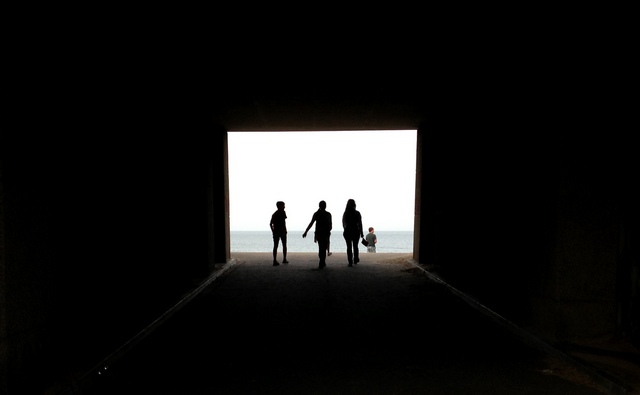 Today marks a month since I landed on Scottish soil, and so it seems only right for me to spend some time reflecting on how the ‘big move’ is going. I think the title of the post sums things up accurately enough. And by it, I mean everything.

Sure, maybe you’ve seen some pretty pictures or heard rumour of fun adventures. While those are pleasant enough moments, they have only been a tiny slice of what the past month has been like for us. Let’s take stock of the journey so far – the life we have left and the one we’ve embraced.

Back in the States, I had a j–o–b. One that I found fulfilling, and one that I would occasionally feel half-way competent at. Now, I’m an under-employed full-time student. While the pastorate wasn’t a lucrative profession, I never wondered if we were going to be able to keep the lights on. We now find ourselves in a situation where despite many people’s generosity, we will have opportunity month after month to see God’s provision for us. In sum, we have traded in a measure of financial security for financial vulnerability (or perhaps more accurately, financial irresponsibility).

Speaking of irresponsible, we left a house. We haven’t sold it. We haven’t rented it. We left it. Mind you, we hope that one of those two options will work out soon, but a month has gone by and nothing yet. What have we gotten in return? After two-weeks of an ulcer-producing home search, we landed in a home that is smaller and less nice than the one we left. Oh yeah, and it costs nearly twice what our home in Arkansas might rent for… that is if it would, in fact, rent.

The list could go on and on. Schools we really liked for schools that are ok. Roads, grocery stores, and bureaucracy that we knew how to navigate for a world of unfamiliarity that takes three times the effort and time it should to get through. I don’t even want to think about the fact that I haven’t clipped into a pair of pedals in over a month.

But frankly, all of that pales in comparison to that which has been the hardest to leave which is of course people. Friends, family, church, small groups, students, teachers, biking buddies, familiar faces at restaurants and grocery stores. We’ve left a community in which we were deeply embedded. People whom we had the privilege of loving and who in turn loved us. And while we are well on way to making new friends here, there is a sense in which I think all of us feel lonely. Thank goodness that there are six of us (presently seven!) so that we are never truly alone.

The story of Abraham has often come to mind in the past month. Not that I would presume to suggest that I have anything close to the measure of faith that he had, but I would say that I have come to better appreciate his story more in a very tangible way over the last thirty days. I think I can identify with the bits of his story that are left untold in the Genesis account. The sort of thoughts and emotions that one has to read between the lines in order to pick up on.

I’ve wondered how he felt about leaving the familiar behind. Or how easily he slept at night in the Judean country-side while the burden of providing for his clan weighed heavily on his mind. What were his thoughts as he wandered through a unknown land and encountered a foreign people? Most of all, I wonder how many times Abraham second-guessed his encounter with God in which he was told to set forth into the unknown. As he led his family out of Ur, surely he look back over his shoulder more than once and thought, “this is all wrong.”

Not that I was under the illusion that it was all going to be easy. From the outside looking in, one might have made the mistake of thinking that this journey has been an easy one for us. Certainly as I tell the story that began over a year ago, there are countless stories of God’s faithfulness and his seeming to open doors that would have otherwise appeared sealed shut. And that is all true enough. But what may have gone unrecognized is that getting to the place to even test the doorknob took a fair amount of perseverance. Likewise, many have only heard the part of the story in which hurdle after hurdle was miraculously overcome. But it doesn’t convey the sense of discouragement that comes when you bump up against a door that doesn’t seem to budge.

What do you do when your house hasn’t sold? Do you take that as a ‘sign’ that this isn’t God’s will for you? Or do you push on? Similarly, when you don’t have a predictable source of ample income, is that also a sign that it is time to head for greener pastures? I’m wondering how often I’ve simply reduced godly decision-making to fiscal responsibility. Surely, I bow the knee to Christ and not just the almighty dollar.

Sorry if this in any way shatters the image of the idyllic life you thought the Chinos had found across the Atlantic. The truth of the matter is that while following a God-given dream can be exhilarating, most of the time it is just hard work. In fact, maybe the willingness to press on when it is hard is the difference between a fancy and calling. I came across an article on Steve Jobs, and the following words describing the difference between passion and obsession resonated with me…

A disconnect develops between what many of us want passionately and what few of us are willing to obsess over and sacrifice to achieve. The passionate and obsessive are often reading from similar scripts with entirely different endings.

Obsession camps out for Radiohead tickets. Passion goes to the show and sings along, but thinks the fans with their Kid A tattoos are creepy. However, only the obsessed end up with front row seats.

Obsession demands an outcome, where passion doesn’t. It can be swayed into other pursuits when it doesn’t get its way.

Passion wants to change the world, but often hasn’t put in the effort to become great at anything of value. Even worse, passion sometimes knocks over those in the trenches, the obsessed doing the hard work to push their fields forward despite the obstacles.

Substitute the word obsession with calling (not that they are dissimilar) and I can get fully on board with the sentiment. I’ve ended up with a fair share of front row seats at concerts, and I would consider it tragic if my efforts resulted in knocking over someone trying to do the hard work in the trenches. I can only hope that the clarity of God’s calling in the days and months leading up to our departure will sustain in the hard work of pushing forward.

As always, I have more to say, but it is time for other pursuits.

13 Replies to “we are doing it wrong”