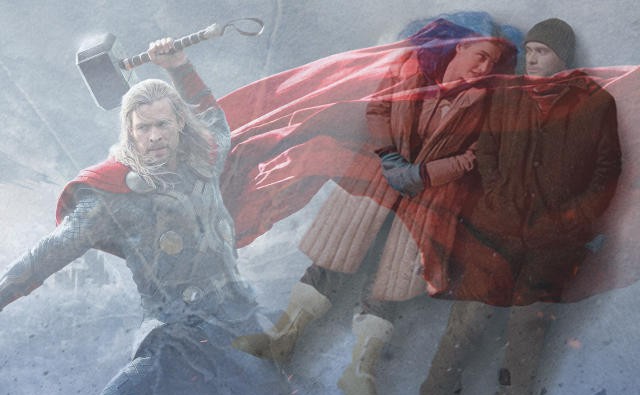 The two men with whom I share an office have different approaches to movies. One prefers to simply enjoy the experience of watching a movie and therefore gravitates towards the sort of film that seeks to entertain. This is the kind that you can appreciate knowing that the succession of images unfolding on screen is make-believe and therefore doesn’t have much to do with real life. My other officemate tends to prefer a film that tells its story in such a way that it makes demands of him. This is the kind of movie that, while telling another’s story, is actually telling our story. We don’t simply ‘watch’ these sorts of movies, but these stories draw us into them in such a way that we find ourselves as participants. We are invested. They make us think and in doing so they lay claim to us. I’m somewhere between the two. There are times when I like to be challenged and changed, but there are lots of times when the escapist in me simply wants to be ‘entertained’.

What is true about movies can be true for theology as well, and Barth’s chapter on “Concern” is essentially a chapter about being invested. His primary contention is that theology – true theology – will always be of this latter variety. While we might think that one can approach theology with an aloof detachment, simply an object of intellectual inquiry, by virtue of theology’s object (really subject, but that’s another post) one can never remain a neutral observer. In as much as one thinks he or she has maintained an ‘objective’ point of view, then ‘theology’ hasn’t happened. Perhaps it is best to let the man speak for himself…

When a man becomes involved in theological science, its object does not allow him to set himself apart from it or to claim independence and autarchic self-sufficiency. He has become involved in theology, even if his reasons for such involvement may have been very superficial, or, indeed, utterly childish. Certainly, he never knew beforehand what a risk he was taking, and he will certainly never fully grasp this risk. But at any rate he has taken this step. He is a theologian because he finds himself confronted by this object. His heart is much too stubborn and fearful, and his little head much too weak, but he cannot merely dally or skirmish with this object. The consequences can no longer be avoided. This object disturbs him-and not merely from afar, the way a lightning flash on the horizon might disturb one. This object seeks him out and finds him precisely where he Stands, and it is just there that this object has already sought and found him. It met, encountered, and challenged him. It invaded, surprised, and captured him. It assumed control over him. As to himself, the light “dawned” on him, and he was ushered up from the audience to the stage.

Barth seems to recognize some danger in turning this into an individual’s existential experience with God and seeks to head this off by anchoring this thought in “concentric circles” of concern. God’s concern is for the world, the church, and the individual. The individual finds herself encountered by God because she is part of the church and world to which God has chosen to reveal himself. It isn’t that the individual’s experience doesn’t matter, but it matters because she finds herself as part of church and world that God cares about.

And hopefully Barth won’t mind if I reverse the flow of concern. If the theologian finds himself ‘concerned’ with God because God has chosen to move from the largest circle of concern inward – world to individual, then a “captured” theologian is one who isn’t concerned solely with God and even less so by his private theologizing. Rather the “ushered up” theologian is one who necessarily finds his concern with God expressed in his concern for the church and the world.

So… anyone seen a good movie lately?